Tongyeong is a small, but noteworthy, connective point along the southeast coast of Korea. Named after the Samdosugun Tongjesayeong (삼도수군통제사영) naval force stationed here during the late 16th and early 17th centuries, it wasn’t until after the installation of this force that Tongyeong really became an economic center in the region. By the 1700s, its crafts culture was renowned enough to where the products produced here bore the distinguished Tongyeong name. This tradition of master craftwork continued into the colonial period with artists like Kim Bong-ryong – a lacquerware craftsman who, in the 1920s, was even able to present his work abroad in Japan and France.

The colonial modernization of Tongyeong began with an influx of fishermen from Japan, yet aside from it being a sheltered and strategic coastal point, it is unclear as to why the Japanese were so interested in developing Tongyeong. The fact that this seemingly sleepy port town had a waterworks and large government hall is indicative of its importance to the Japanese government in Korea. Further evidence of Japanese interest in the area can be seen by the existence of the canal and Haejeong undersea tunnel built between Mireukdo and Tongyeong proper. Even today the city remains an important connecting port between the mainland and the small group of islands to the south.

Dang-dong/Bongpyeong-dong
Prior to the Japanese occupation, the shallows between Tongyeong and the islet of Mireukdo were only traversable at low tide. At high tide, Mirekdo was disconnected from the mainland. For whatever reason, this area was valuable enough to merit the construction of a tunnel. Initiated by the Japanese settlers, a canal was dug out and the Haejeong undersea tunnel was completed in 1932 – the first undersea tunnel in Asia. Though the facades have changed, the wooden trussed-roof canopies covering the entrances of either side appear to be original. It’s not only an impressive engineering feat, but its the kind of physical manifestation of modernization that became such an important part of Japan’s identity at this time. 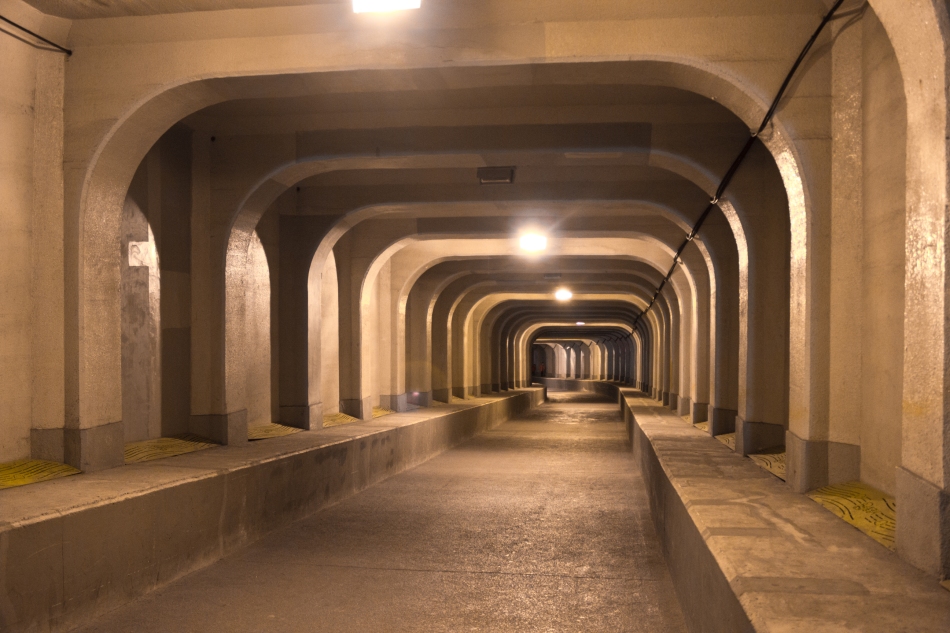 Next to, and a block away from, the Haejeong tunnel are a few more colonial or post-liberation structures. 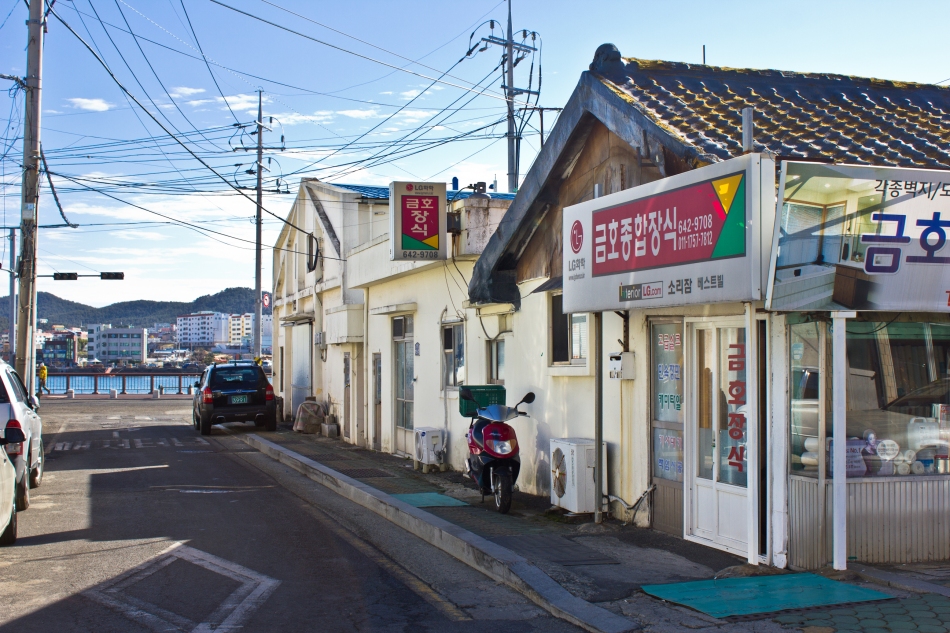 Docheon-dong
Following Jungang-ro away from the tunnel leads one to the Former Tongyeong County Office. Built at the tail end of Korea’s occupation in 1943, its modernist design is typical of colonial administrative buildings in that it resembles other government halls like the ones in Daejeon and Cheongju. It appears to have been finished with scratch tile, a kind of relief tile created between Frank Lloyd Wright and Japanese tilemakers in the 1920s for the Imperial Hotel in Tokyo. Aside from an odd wooden beam, the only part of the interior that remains is the staircase, which has seen some kind of resurfacing at one point or another. The single decorative element on the entrance over the facade has changed, making me curious as to what other things were taken out. A somewhat recent photo shows that there were at least three of these pieces on the facade. The old Tongyeong County Office now serves as the Tongyeong City Museum.

An old warehouse directly across from the Tongyeong County Office is pictured below. Next is another minor, but interesting, colonial or post-liberation building in Docheon-dong along Docheon 5(o)-gil just before the street changes names to Jungang-ro. 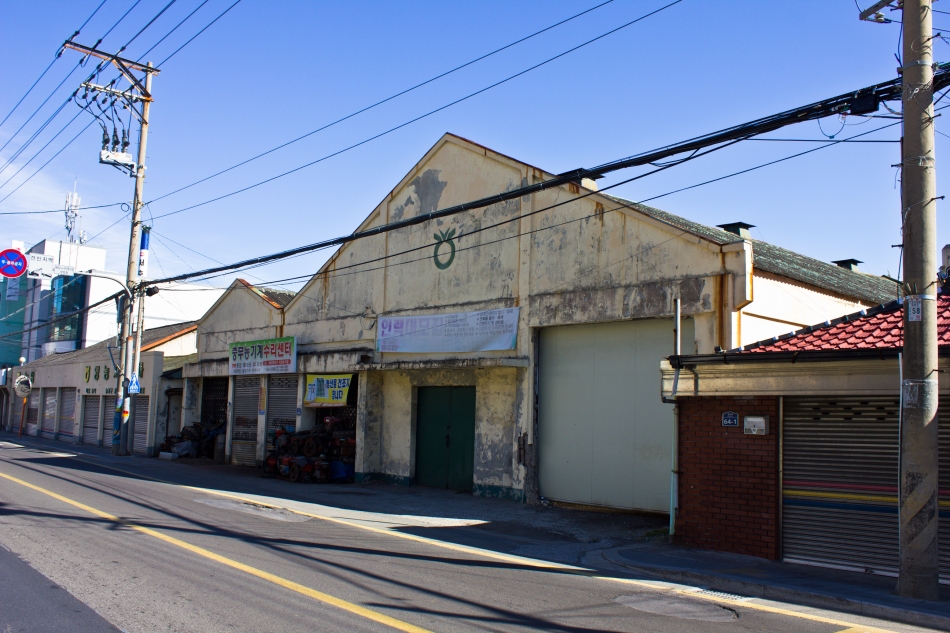 Hangnam-dong
There are few buildings left in the main port area. Their facades have been redone with corrugated tin or newer tile. Though not pictured below, Tongyeonghaean-ro also has some storefronts that, aside from their roofs, look absolutely nothing like their former selves. They weren’t worth photographing, and none of the buildings in this dong are particularly noteworthy. However, some are included here simply because they are the only buildings of their kind left in the area. 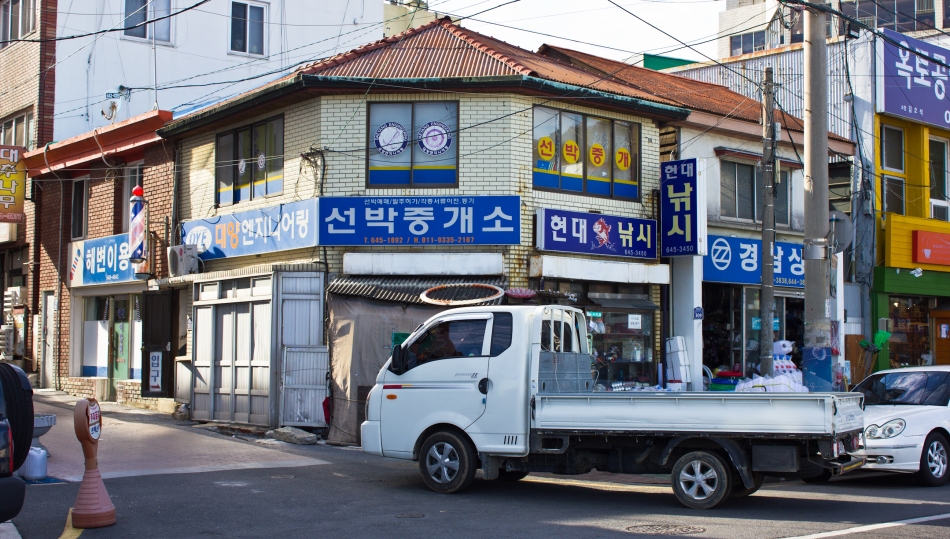 Jungang-dong
This neighborhood has a couple of significant remaining structures just to the left of Chungmu Church. One of these has a decorative relief border near the roof. Next to it is a distinctly Japanese house. Neither of them are in bad shape as they retain some of their original elements. 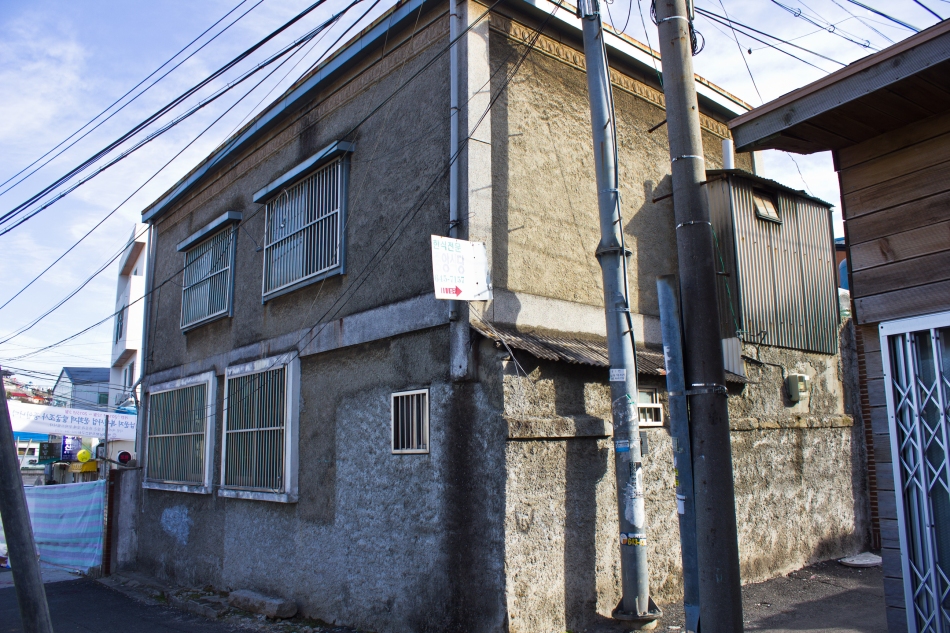 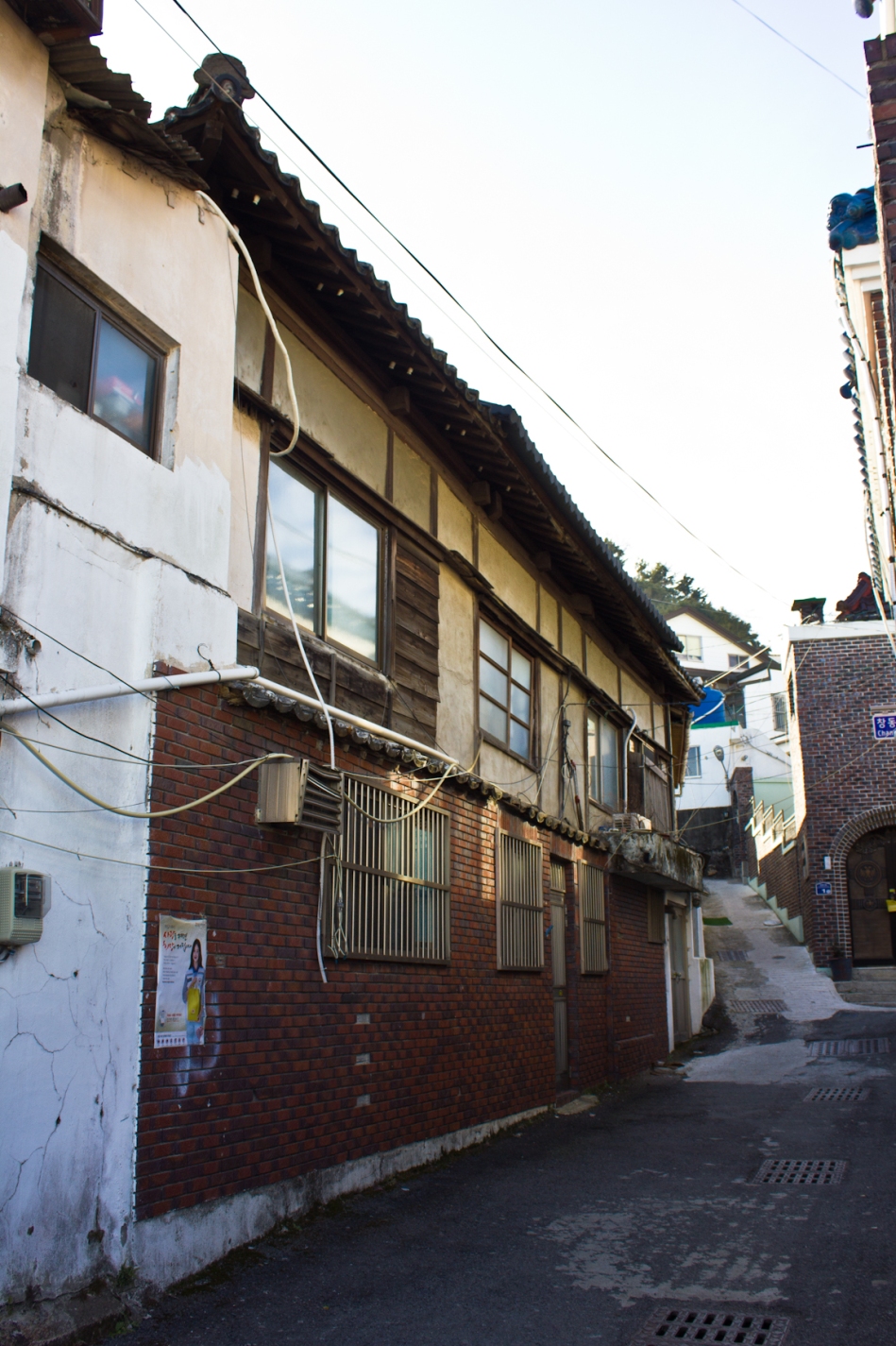 Munwha-dong
Sitting on Seomun-ro is the Former Tongyeong Youth Corps Center. Built in 1923, it was established by local patriots who were active in promoting ideas of Korean independence in the wake of the March First (3.1) Movement of 1919. The building itself is a rather plain, red-brick rectangle that would be more handsome if it had its original windows and doors. 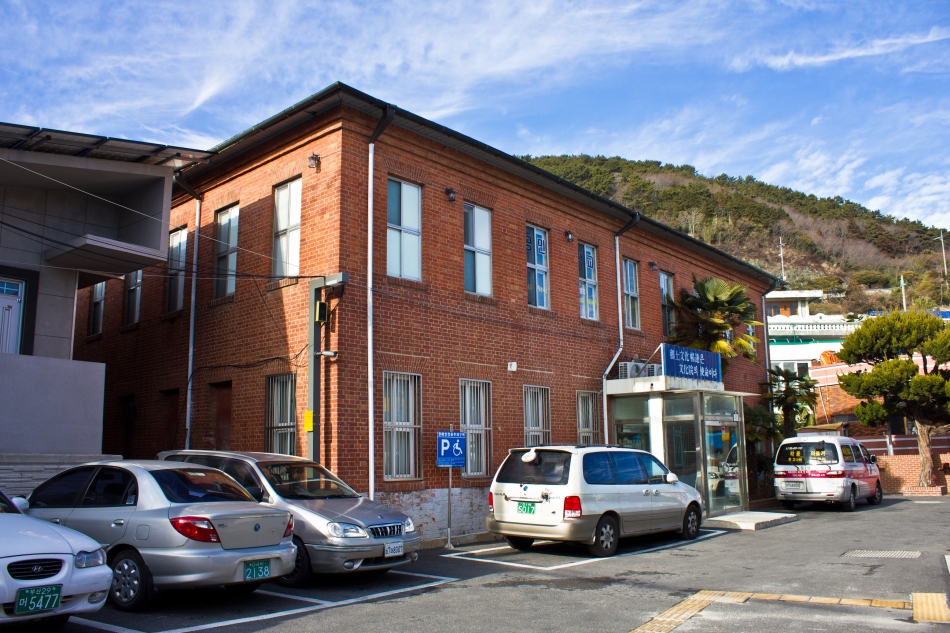 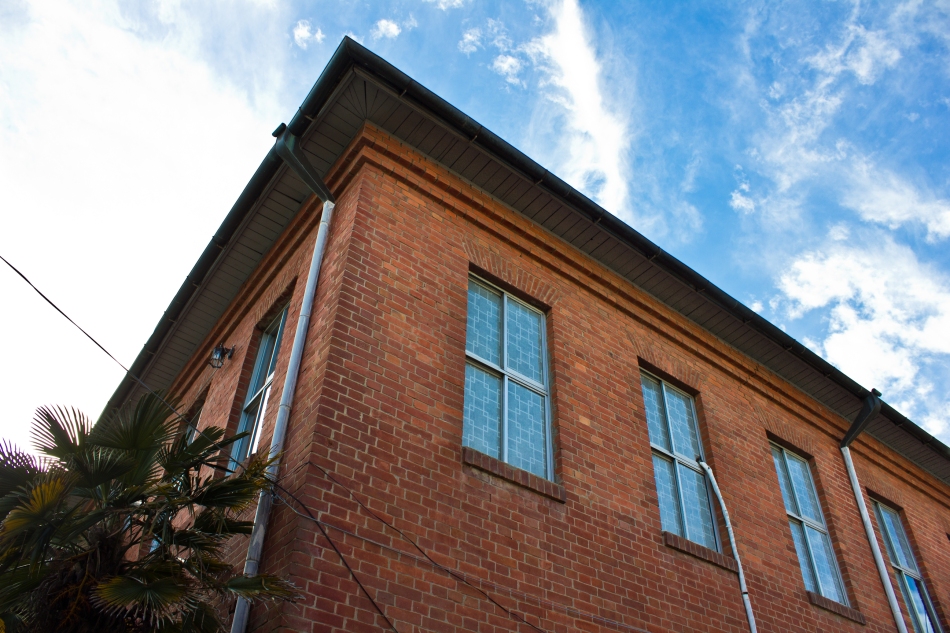 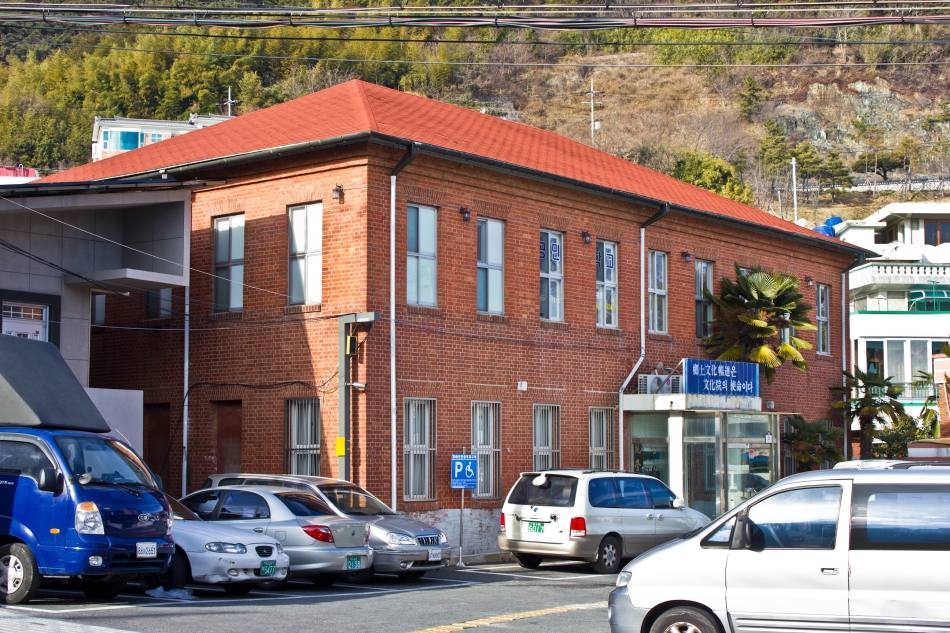 Tongyeong’s old water supply buildings sit at the peak of a hill surrounded by Seopirang Village (서피랑마을). The hexagonal structure with the arched doorway and domed roof was built in 1933. Its style resembles that of other colonial city water facilities across the Korean peninsula. 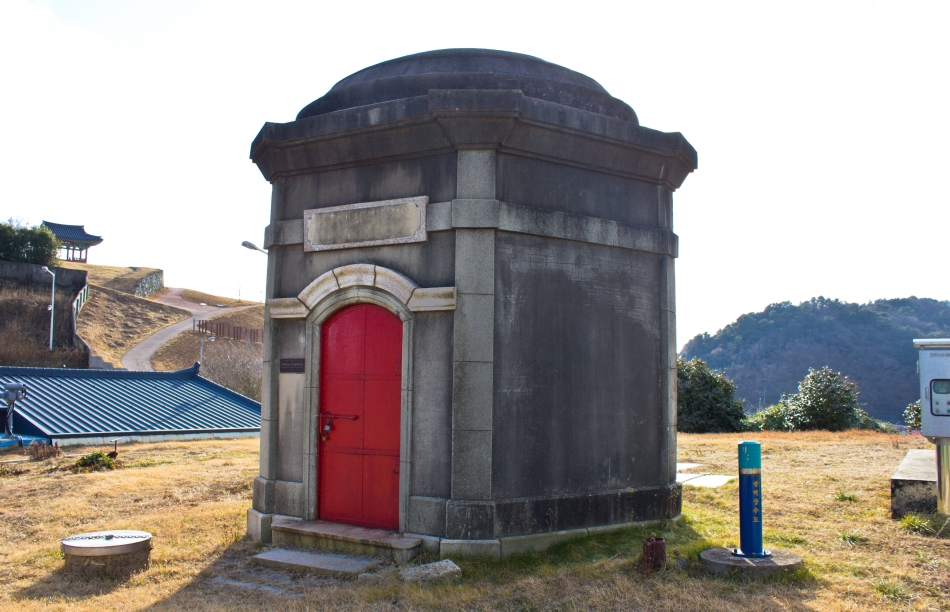 Former Tongyeong County Office (Google Maps says “Permanently Closed,” but as of January 2015, it is open to the public on weekends (and probably weekdays)):