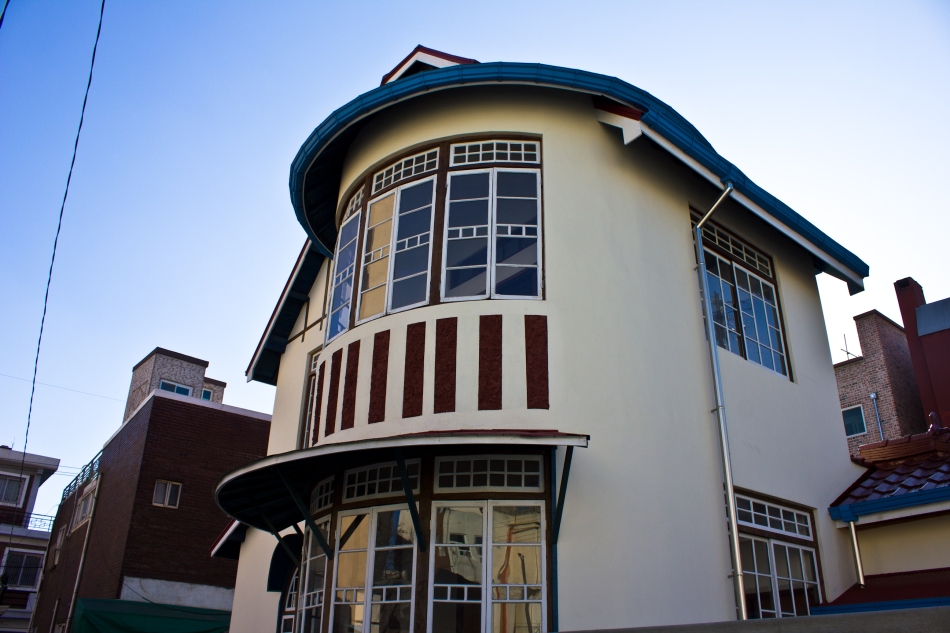 As the railway fostered development around Daejeon Station and Jung-dong, the city also expanded west into modern day Jung-gu. Daejeon doesn’t have a lot of colonial period buildings left, due in part to the Korean War and recent city developments. As of 2010, just roughly one fifth of Daejeon’s historically significant structures remain.1

Daeheung-dong
Taking up the southern half of the city center, split down the middle by the Green Line, is Daeheung-dong – home to a number of historical sites – including the Pointed House that was almost destroyed a few years ago when its neighborhood was flatten to make way for new apartments.2 Built in 1929, the Daeheung-dong Pointed House is still in the process of being reassembled and restored at its new location. However, the exterior seems to be more or less finished at this point. On inspection, it appears the woodwork, windows, and parts of the roof were all saved. Everything in between appears to be new, and it is unfortunate that more of the original structure could not be kept. That being said, at least this building still exists in some form (unlike the old school master’s house that burned down just two years ago). The Pointed House has a unique conical roof with a semi-circular protrusion that presumably houses its tokonoma, a built-in recessed space. Though its exterior makes use of Western design elements, the interior used tatami floors and was reportedly still very true to the period before it was dismantled.3 The Pointed House was previously used as the head of the Daejeon Railroad Bureau and, later, military officials. 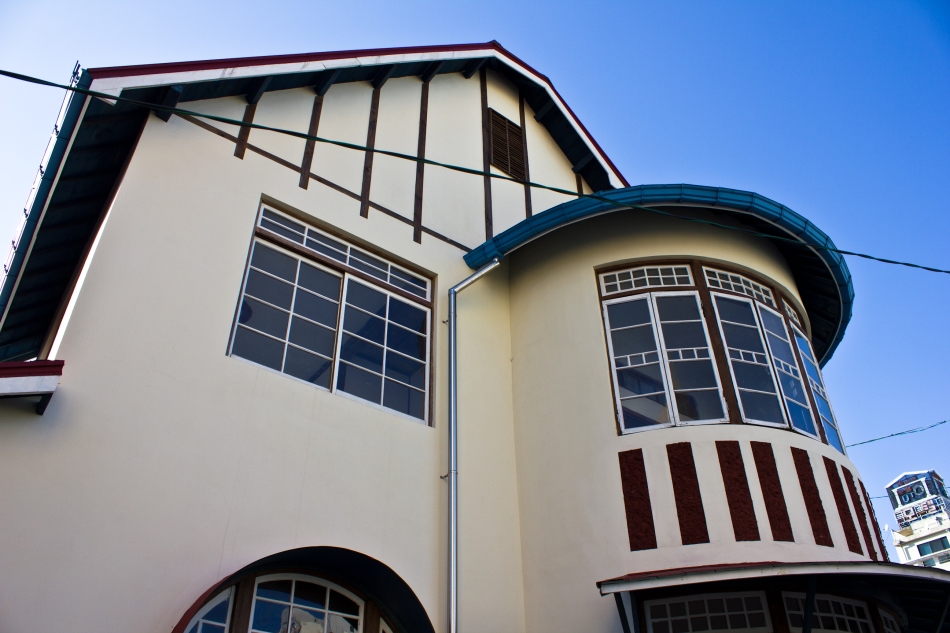 The present intersection of Daeheung-ro and Daejong-ro used to be a rotary with a version of the Greek Discobolus of Myron statue at its center. On one of its corners sits an old provincial assembly hall or meeting house of some kind that supposedly dates to 1955. Lined by tall, arched windows on both walls facing the street, it follows a style more typical of the colonial period. The geometric iron bars, which form tiny balconies at each window, also seem pretty old. Built with a hipped roof that is presently covered in vinyl, it now houses the Joeun Real Estate Office.4 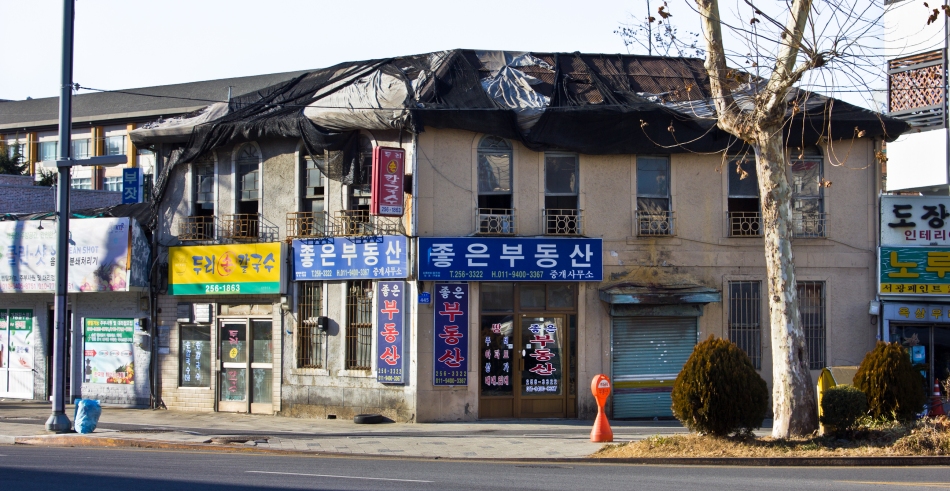 Southeast from Jungangno Station is an auditorium at Daejeon Girls’ Middle School. Built in 1937, it was constructed of red brick in the art nouveau style. Its arched roof is its most noteworthy feature. With large windows along either side, it is typical of pre-liberation school buildings in that bricks were laid at the corners to form quoins in an attempt to relieve the structure of some of its plainness.

A block away from the auditorium is the former Daejeon Branch of the Agricultural Products Inspection Center (also known as the Chungcheong Regional Branch of the National Agricultural Products Quality Management Service). Designed by Bae Han-gu, the first person to open an architectural office in Daejeon, it features blocky, rectangular frames around all of its windows. Built in 1958 using cement washing methods on a base of reinforced concrete, Bae also used galvanized iron within the rounded lower edges of the roof. Of particular note are the blinds on the second floor, just above the entrance. These were designed to control the angle and amount of sunlight filling the room. The building’s hanok-styled giwa roof is the only traditional Korean design element present in the entire structure. Fortunately, it has been well maintained and is now used as an art space. 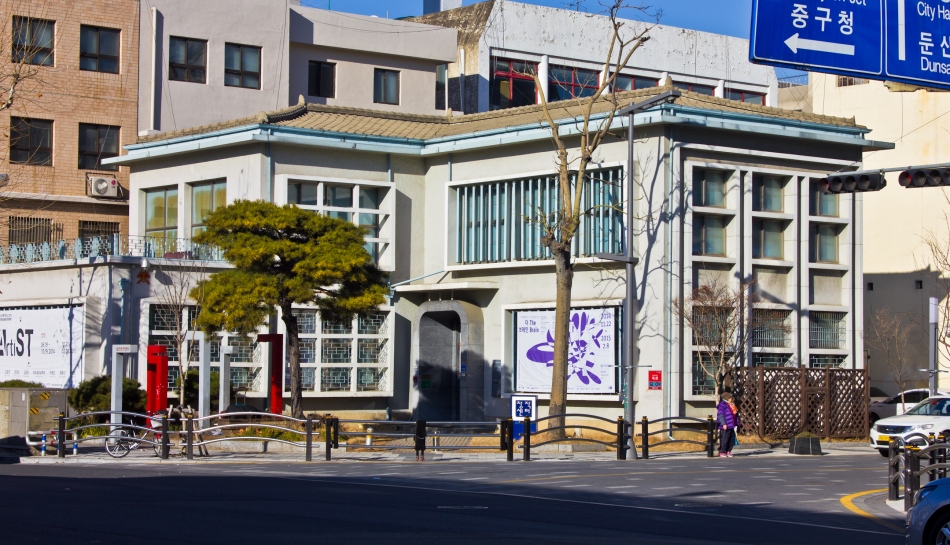 While this one really reaches outside of the scope of this blog, since it is right across the street from the Agriculture Building and is also architecturally significant, it deserves a brief mention. Built in 1962, the Daeheung-dong Cathedral is another good example of modernist architecture in Daejeon.

Along Bomun-ro 205beon-gil is a row of homes from the 1930s and 1940s that formed a Japanese officials’ village, or gwansachon (관사촌).5 Hidden behind short, red brick walls, it is difficult to get a decent view of any of the overall structures. However, the village is representative of what life was like for some during the colonial period. There are even a few auxiliary wood-paneled buildings remaining. At the turn of the street lies the former Chungnam Provincial Governor’s Mansion (fourth picture below). Built in 1932 in the art deco style, its newer windows and front door detract from its former architectural glory. The roof also appears to be new. Nevertheless, it is a historically significant building in that President Rhee temporarily used this space during the Korean War.6 While I couldn’t get any decent photos of the structure from inside the gate, this blogger was able to get a few (this page also shows an older postcard photo of the mansion.) 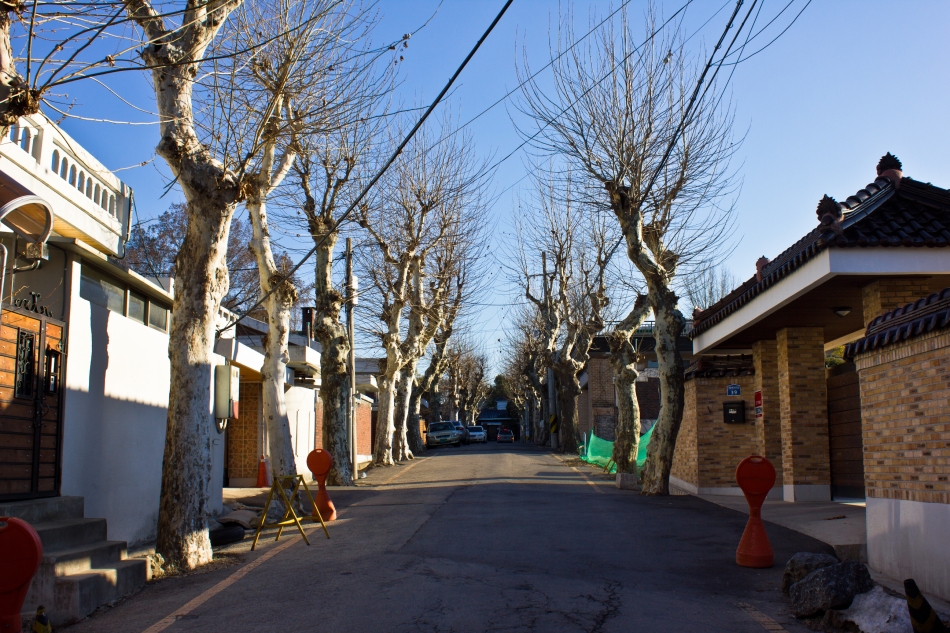 Though now gone, the Old Unam Library and former Municipal Yonjeong Korean Music Insitute was also located in Daeheung-dong. It was unfortunately torn down in the not so distant past.7

Eunhaeng-dong
Slightly northwest of Jungangno Station is a structure whose exterior has been completely renovated beyond recognition. While presently occupied by a wedding business, underneath this building’s facade lies an office of the former Dutch Shell Oil Company. Built in 1956 and covered with brown tiles, it used to have the appearance of a bank or government office, with tall, recessed windows neatly lining the exteriors of the second and third floors. True to modern day Korean renovation methods, it really looks like the present facade was simply built over the original.8 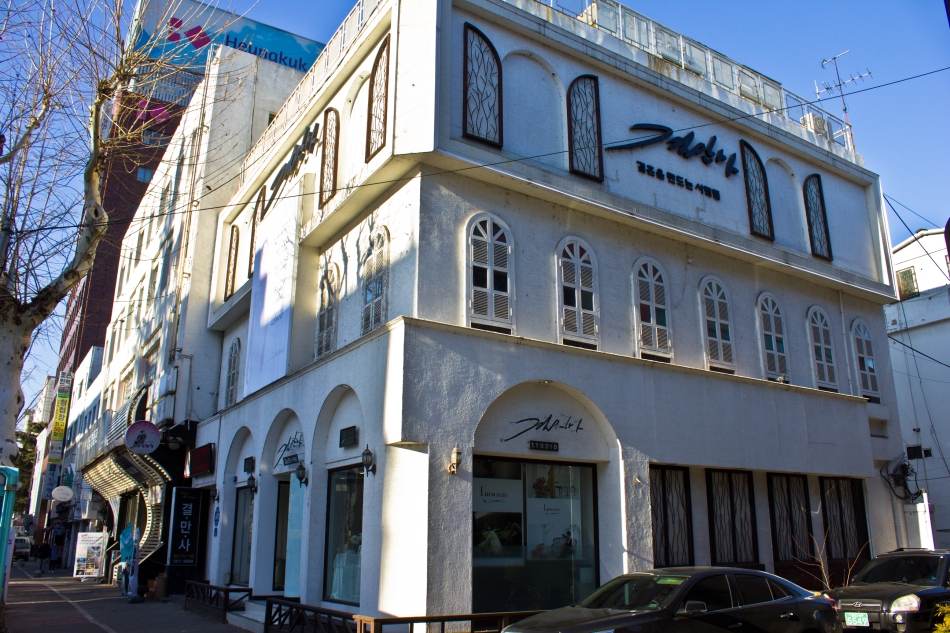 Eunhaengseonhwa-dong
An impressive and eye-catching structure, the old Chungcheongnamdo Provincial Hall sits facing an intersection next to the old, and very plain, City Hall and Jung-gu District Office from 1960.9 Daejeon’s province, Chungcheongnam-do, was established in 1896 as part of a reconfiguration of Chungcheong. As Daejeon had become increasingly important, the provincial capital shifted here from Gongju in 1932. Construction of this hall was completed that same year. Made of red brick, concrete, and finished with scratch tiles, it is a well preserved structure. The yellow scratch tile can be seen on the front side while, on the rear exterior, red brick is visible. Pine flower embellishments, debatably emblems representative of the Great Han Empire, were placed over the tile facade around the exterior. The interior, with its modernist (almost deco styled) stair banisters and arched hallways, is particularly beautiful. Wide, arched double doors give way to the lobby, where decorative, blocky molding follows the ceilings throughout. It once served as a temporary capital of the South Korean government during the Korean war.

Hidden just behind this is a former Provincial Office. Built just within 1958 on December 31, it served as a lecture hall and center for training public officials. The rounded entrance and “sails” along the exterior of the second floor give this otherwise simple modernist structure a lot of character. On the interior side of those “sails” is an auditorium, which was presumably used for training seminars and the like.10 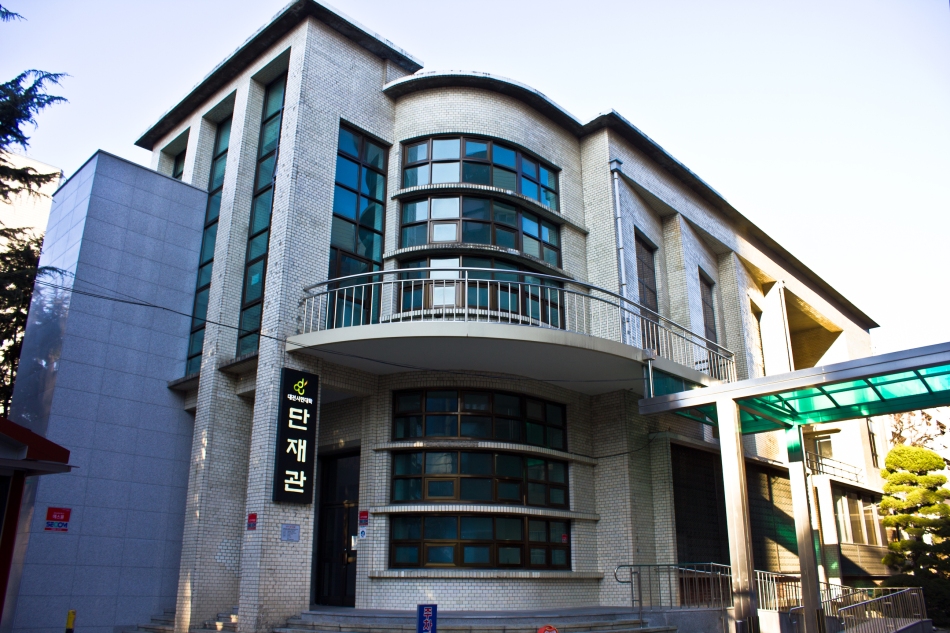 To the right of the Provincial Hall is the old gymnasium for the Chungnam Police Bureau. Built in 1963, it is also a little outside the scope of this blog, but it gets mention because it is architecturally interesting, there is hardly anything in English written about it, . . . and it was just right there. With a hanok inspired roof, it is similar to the previously mentioned Agricultural Products Inspection Center in that its roof is the only departure from its modernistic style. The large windows and squared-off, minimalist entrances seem slightly Western, with the triangular protrusions on the roof of the northeastern side almost appearing Japanese.11

Jungchon-dong
This neighborhood was the former site of Daejeon Prison. It held independence movement members during the colonial period and, later, was used by the North Korean regime during the Korean War. Next to a borderline brutalist structure that reminds me a lot of Middle Eastern and African government buildings from the 1980s, the red brick and cement guard tower pictured below was built at the time of the prison’s opening in May of 1919. The prison was expanded in 1939 before the main building and fence were finally demolished in the late 1960s. Of the former prison it seems this tower and an old water well are the only structures that remain. 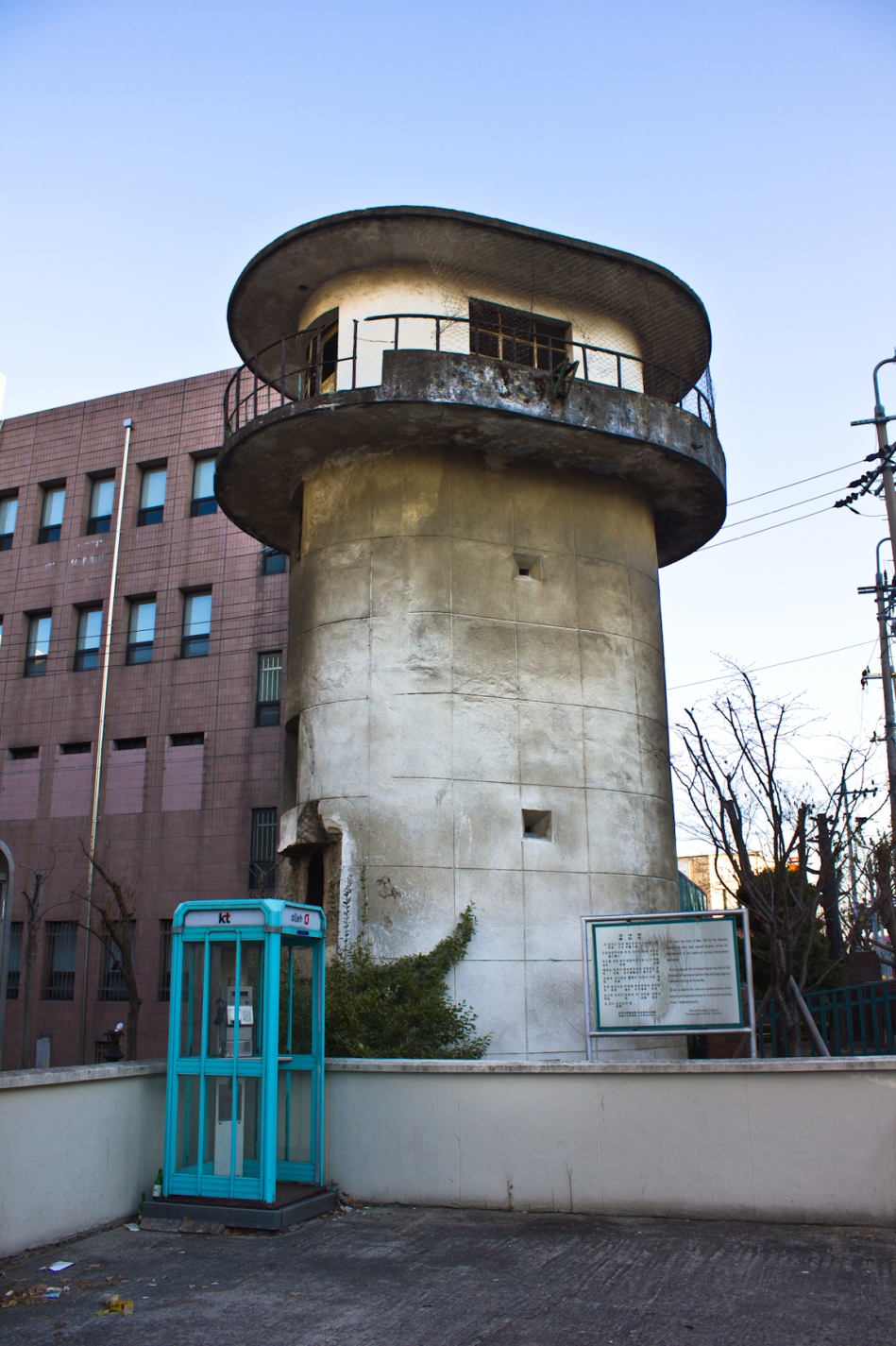 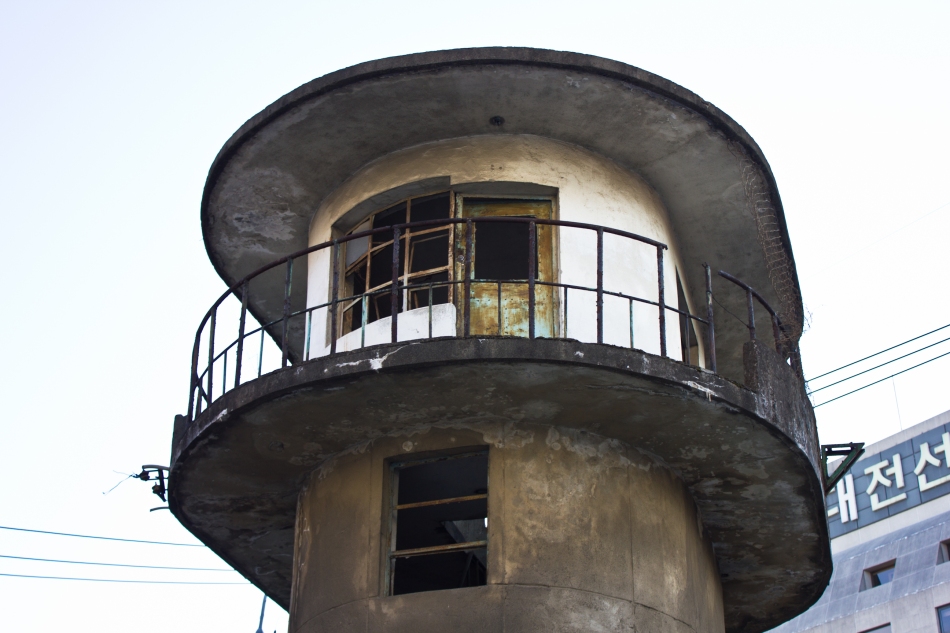 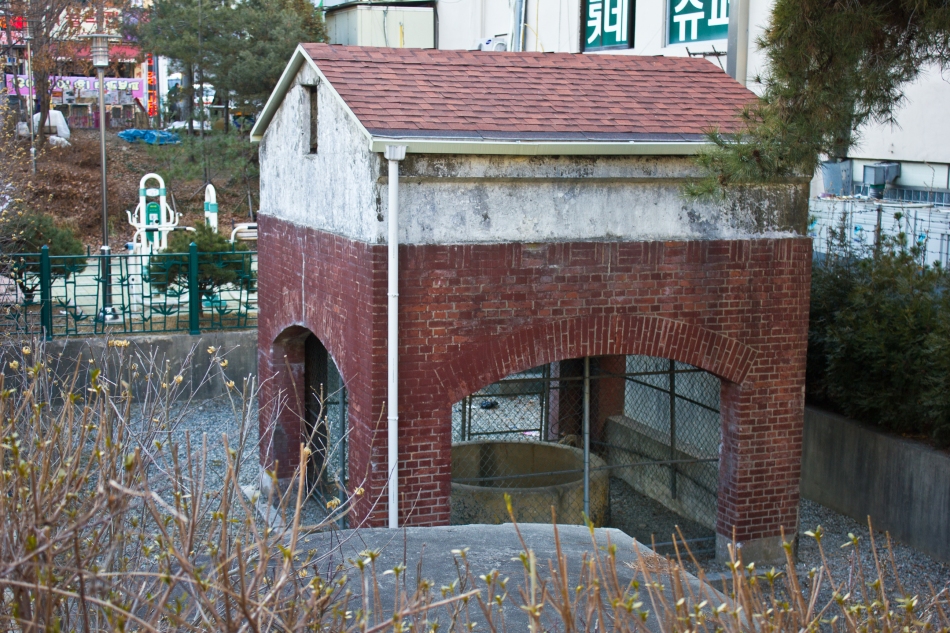 Mok-dong
Daejeon Catholic Church was built in 1921. Now a chapel as part of the Congregation of the Sacred Word Convent, it was the first Catholic church established in Daejeon. Done in the Gothic style, its stained glass windows were imported from France while the “Road to the Cross” steeple was brought over from Germany. During the Korean War, it was occupied by military forces on either side at one point or another. After the war, a former minister and president of the Methodist Theological University in Seoul named Williams, aided in having the building restored in 1955. It is now simply referred to as Mok-dong Catholic Church.12 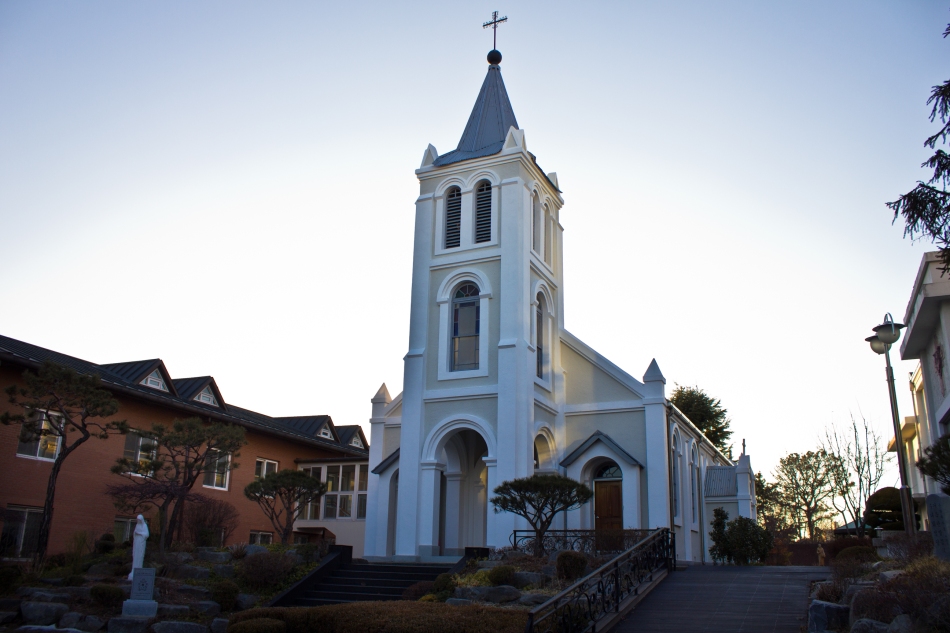 The old well next to the guard tower: