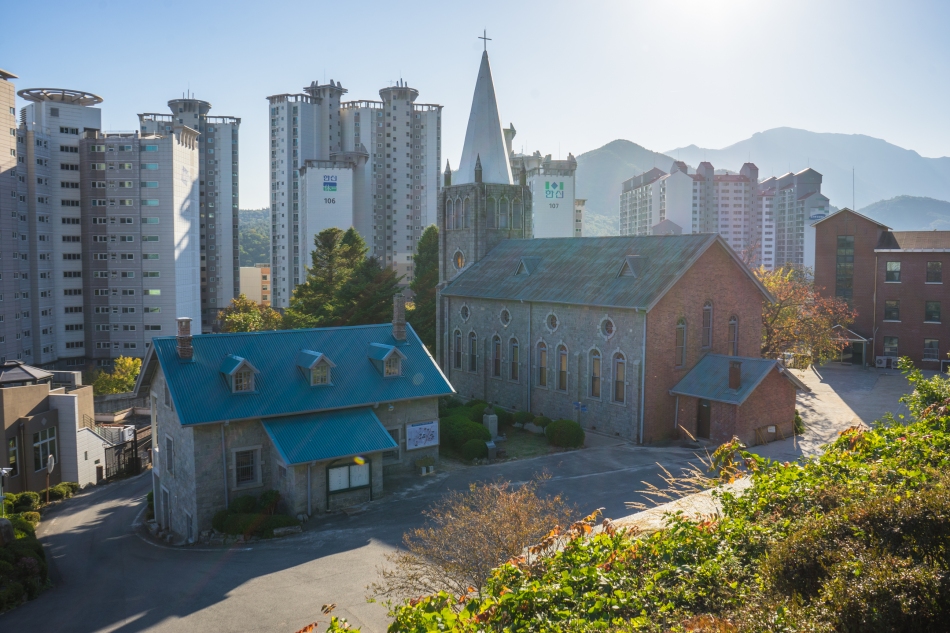 Perhaps no other city in Korea has seen as much change in architecture and infrastructure as Ulsan, for only one of its historically significant structures remain intact. Almost no minor colonial buildings are left, let alone any Joseon relics. It wasn’t until the 1960s that the Ulsan we know today began to develop, but the area had a few small towns all influenced by Japanese modernity prior to this. Photos from the 1920s and 1930s show a drastically different landscape than the industrial one occupying the coastal region today. In the same way that old red brick walls can still be found scattered throughout Masan, single stones from Ulsan’s traditional Joseon structures can also supposedly be seen in a few places, yet everything of note has tragically disappeared.

There are two, in my opinion, important photos that show the situation of the old Ulsan town center in the 1920s and 1930s. The first one is an aerial view of the former downtown area, which shows the Joseon palace-fortress, a number of grid-like streets with Japanese and Korean shops and houses, and a modern Japanese elementary school.1 This second photo shows a close up of the palatial hanok overshadowed by a modern, Japanese built school.2 These structures were Ulsan Public Normal School and Ulsan Elementary School. The contrast of old and new, and the strategic location of the Japanese built school by the center of Ulsan’s traditional government, are symbolic of the broad changes that swept across the Korean peninsula.

In Ulsan, the only area with any tangible early modern remains is Bangeojin. Once outside Ulsan proper, a beautiful stone cathedral in Ulji county somewhat redeems the city of its lack of historic architecture, but the colonial and early modern architecture left in Ulsan is so pitiful that it is barely worth a visit.

Bangeojin was a tiny fishing hamlet in the 1900s. Situated in present day Dong-gu, the port sat on the tip of a small peninsula and was largely insignificant until, in March of 1906, the Japanese erected a wooden light signal pole to help ships navigate at night. This signal was referred to as Deunggan Lighthouse (등간 등대)3 and its construction is representative of the establishment of Bangeojin. Such signals along this eastern coastline were generally constructed during the Russo-Japanese War (1904-1905), but Bangeojin interestingly didn’t receive one until afterward. The light pole was replaced with a real lighthouse in 1910. 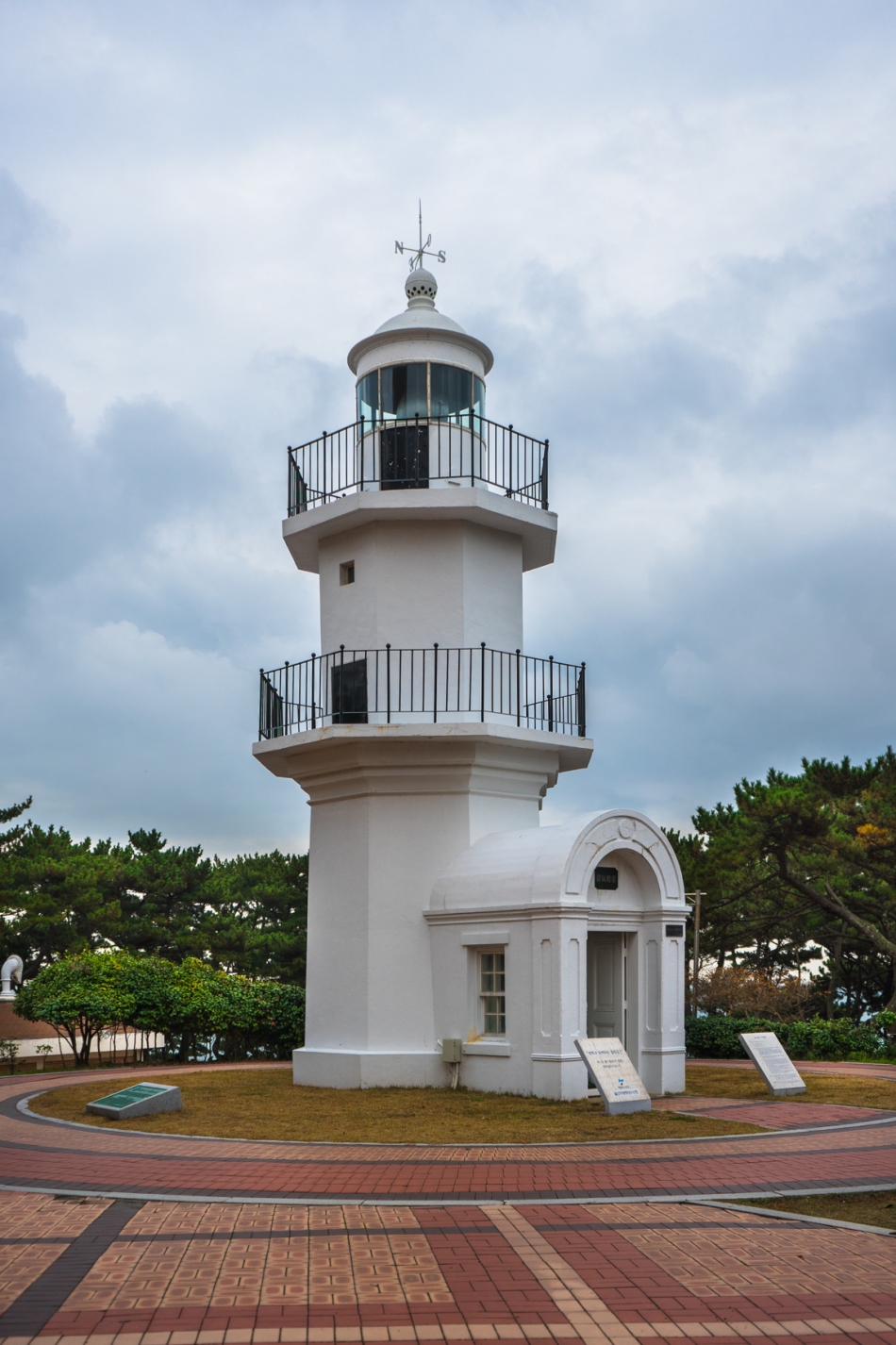 The lighthouse, whose signal could be seen from 33 kilometers away, is a concrete structure dating to 1910. A tiny ladder-like metal staircase (probably one of a kind at this point in Korea’s history) leads up to two platforms. A built-in wooden cabinet can also be seen on the first floor. The lighthouse features a Neo-Classical styled rear window on the base level. One of the porch windows’ cracked paint shows that the frames were made of wood. Curiously, the porch entrance has an engraved Taegeuk at its center. This raises questions such as: Did the Japanese originally build it this way? If so, why would they use a Korean image in the very year that they annexed the country? After liberation, Japanese emblems and text were removed from buildings, so was an old Japanese emblem simply replaced with this Korean symbol? 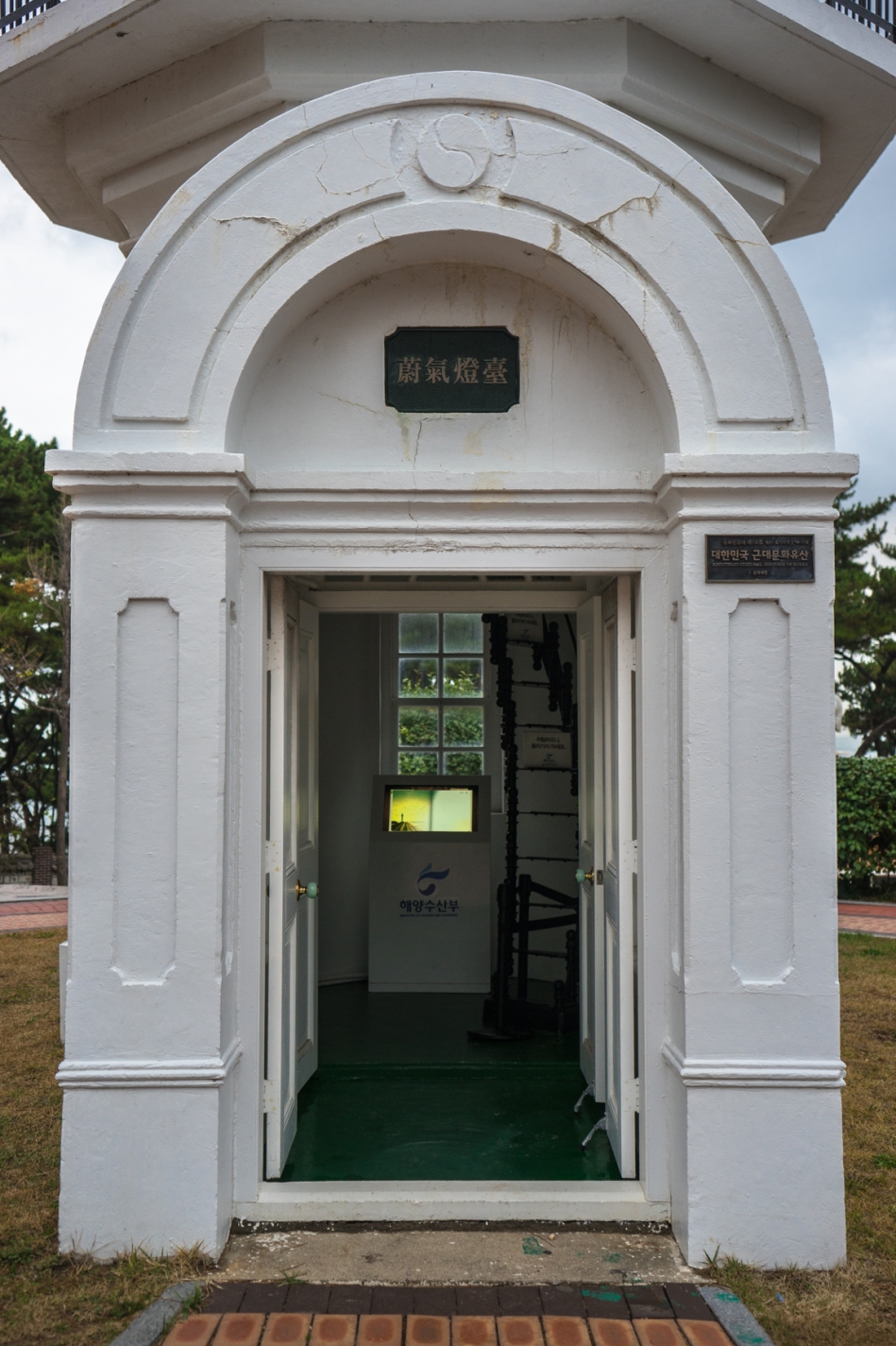 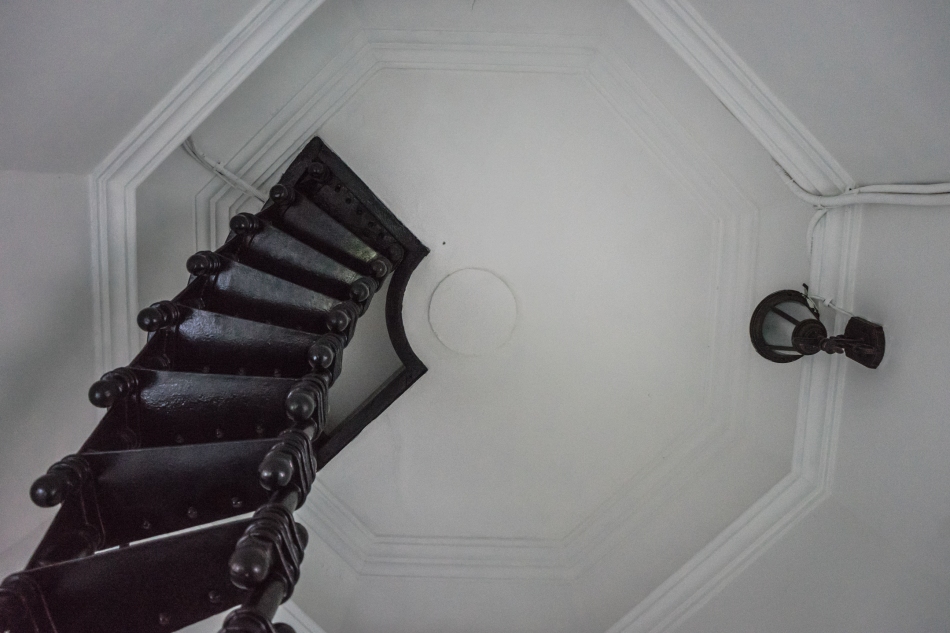 Like Guryongpo (Pohang), Bangeojin was a migrant fishing village. Around 1897, the first Japanese immigrants came from a former town in the Okayama Prefecture of Japan called Hinase.4 However, it wasn’t until after the Japanese government found a 1904 Joseon report showing the Bangeojin area to be a good fishing area that settlers were encouraged to move here.5 It also bears mentioning that, before an international commercial fishing law was passed in November of 1908, it seems only the Korean yangban could fish in this area.6 The law, which has been translated by one scholar as the “Agreement for the Fishing Industry between Korea and Japan”, was quickly followed by two more regulations entitled the “Korean Fishing Industry Act” and “Fishing Industry Enactment Rules”.7 These laws gave legal recognition to Japanese immigrant fishers and their settlements.

By 1924, Bangeojin had a public bath house and a movie theater.14 The port’s breakwater was constructed in 1928, its shipyards followed in 1929, and a passenger terminal was constructed in 1933.15 In 1936, Bangeojin had developed enough for it to merit the administrative division of a township, thus becoming Bangeojin-myeon.16 We can get a decent look at what the docks used to look like via a postcard from the colonial period showing the harbor packed with small boats.

A couple of blocks away from the Bangeojin Intercity Bus Terminal, which isn’t much more than a parking lot, lay some of the last, if not the only, early modern buildings left in Ulsan. These structures can be found along Naejin Street (내진길), a road that follows the shape of the coastline and gives us a vague glimpse of what the old waterfront used to look like. The first structure pictured below is an old, two story building that has been renovated a lot. The only thing that gives away its origins are its frame and an old red brick wall. The brick wall helps form an alley, but it is unclear what was here before. The angle of the wall suggests that it wasn’t part of a building, so what was here before? 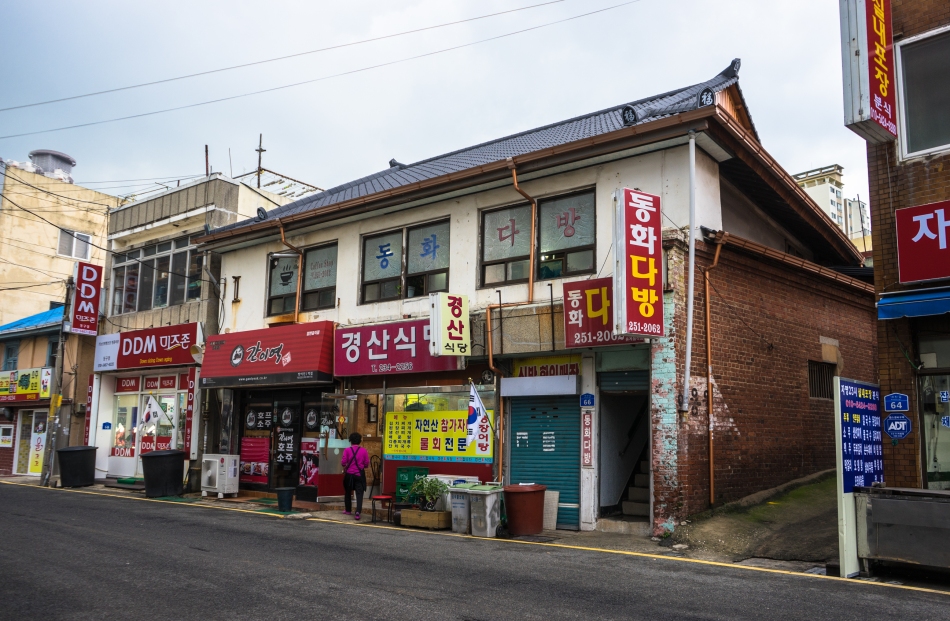 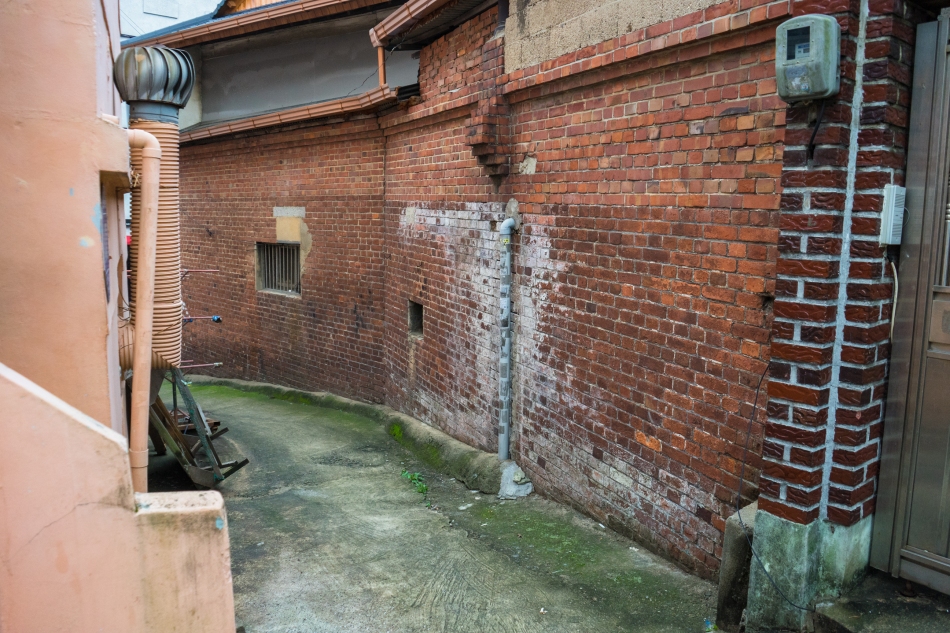 Two buildings down is another two-story early modern structure. Unlike the first, this one appears to retain its original wooden window frames. A Japanese-style building can be found just down the alley as well. 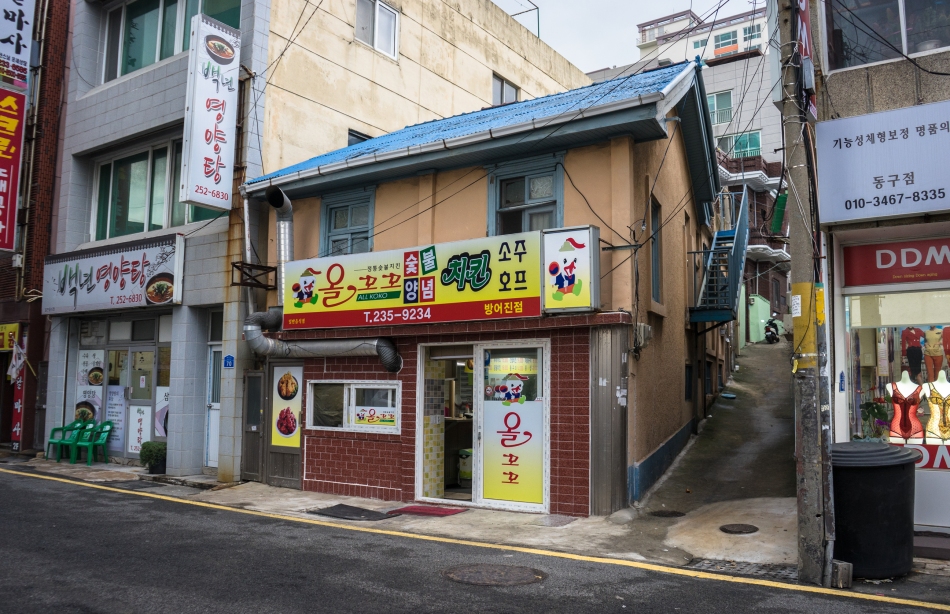 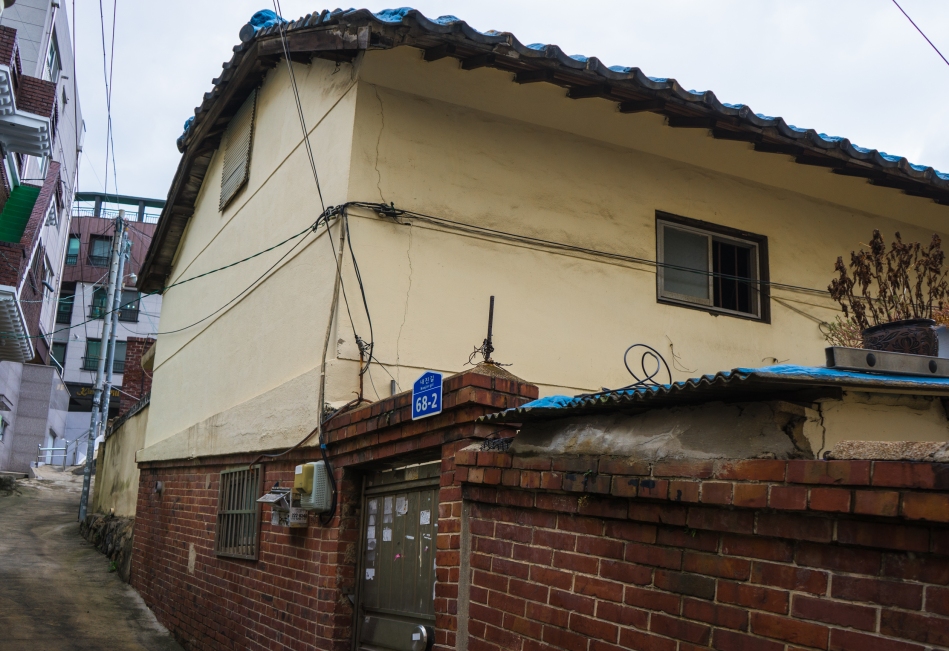 The intersection of Jungji Street and Naejin Street is interesting for a few reasons. Not only is it uniquely wide, but there are a few old structures with questionable origins. The center building is very post-Korean War in style, leading me to assume that there is a colonial frame underneath its newer exterior. Its neighbors directly behind it might also have colonial origins, but I wasn’t able to tell for certain without getting a clear view of the roofs. 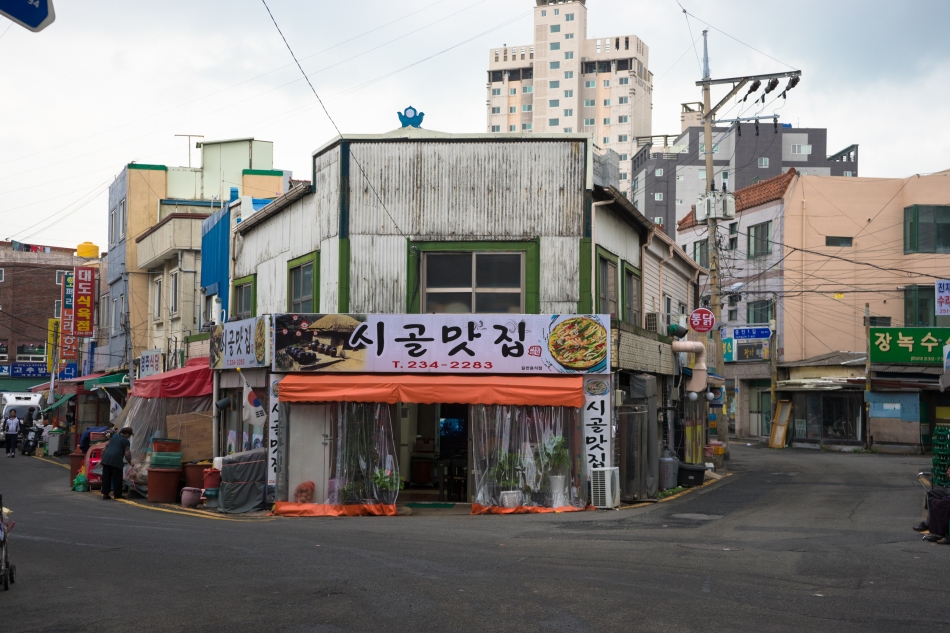 The most Japanese of all the structures in the area can then be found at 울산 동구 중진1길 34, which is just around the corner from the previously mentioned intersection. Despite its worn appearance, the building looks pretty stable. The windows are each a little different, so the glass may or may not be original. At least one of them makes use of frosted glass, but that doesn’t mean it is new. I’ve seen early modern buildings with original frosted windows before, usually in elaborate homes. The second floor still retains its original wood siding and some of its clay insulation is exposed. Interestingly, the street this house sits on was the first to be wired for electricity in 1921.17 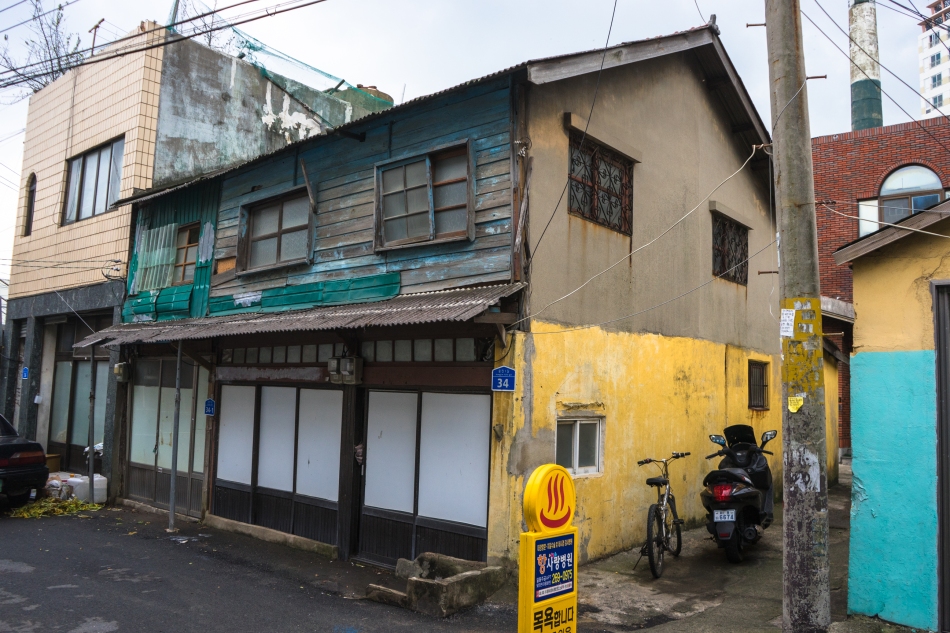 As we move out of the city limits and into the county of Ulju, which falls under Ulsan’s jurisdiction, we can see a few noteworthy buildings spread throughout villages near the Yeongnam Alps. In Eonyang-eup, there are two points of interest. The first site is the town’s old Joseon era fortress. Though Eonyangeupseong was destroyed during the Imjin War (1592-1598), I’ve included it here to give context regarding the area’s history and landscape. The fortress is a rare example of one being built on flat, level land. Its interior is now occupied by rice fields, a few early modern or mid-century hanok, a school, and one old red brick wall. 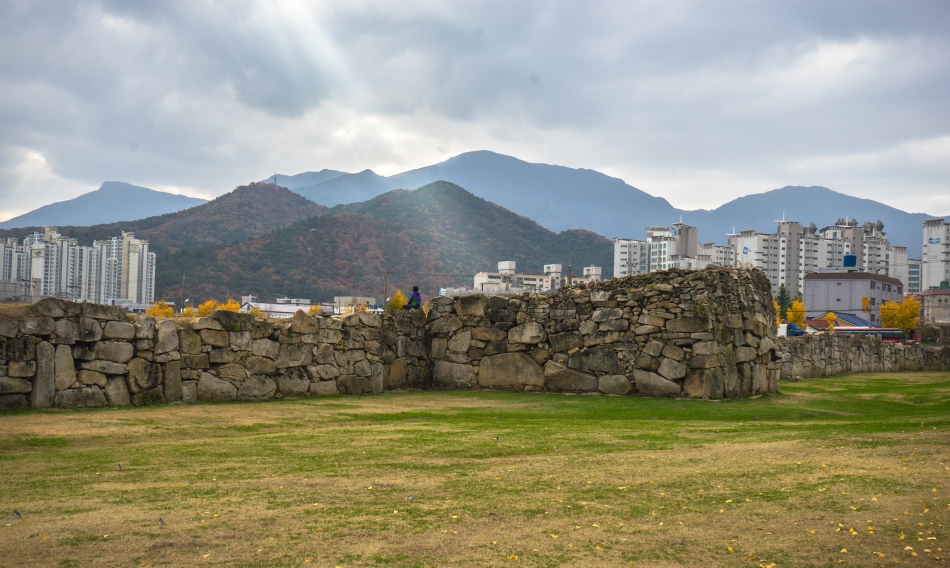 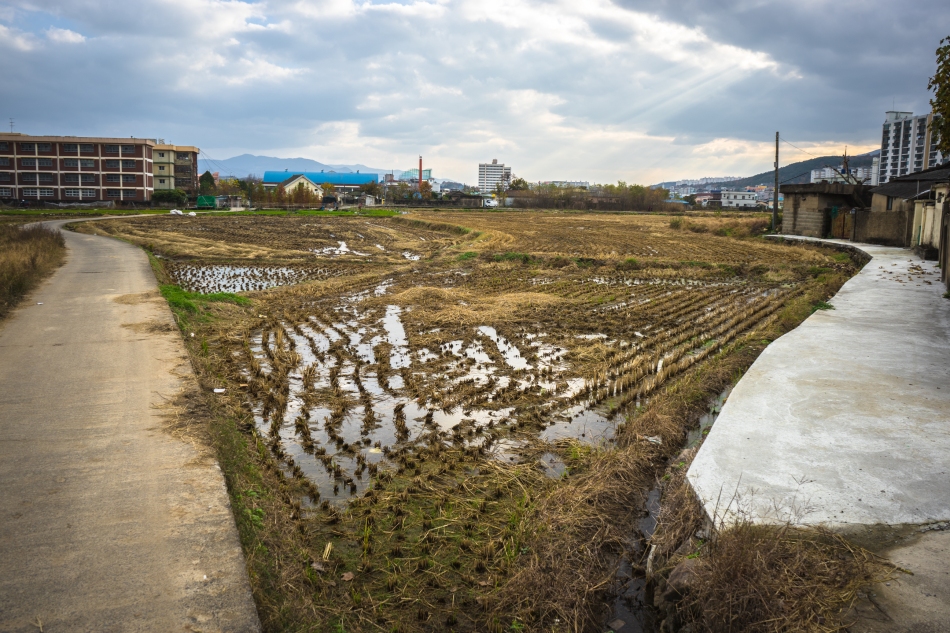 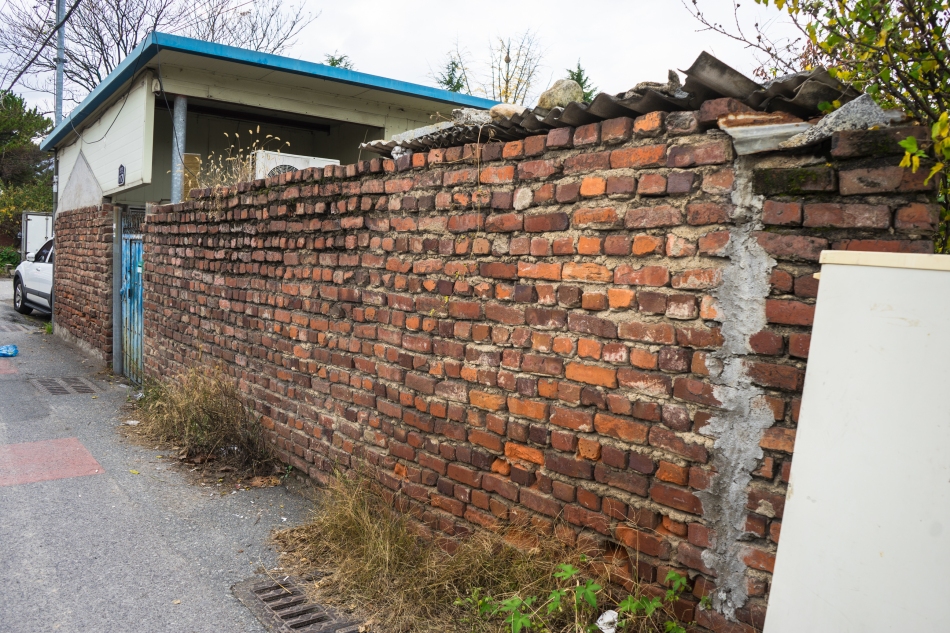 As mentioned before, the one structure that somewhat redeems the area of its lack of historic architecture is the beautiful Eonyang Cathedral. Built in 1936, it is a Gothic stone and brick structure that was supposedly constructed with the help of the Chinese engineers who also worked on Seoul’s iconic Myeongdong Cathedral.18 It features a large bell tower and a gable roof. The structure was dedicated under Emile Beaudvin, a French priest from the Paris Foreign Missions Society.19 Per the dedication stone at the entrance of the church, the archbishop of Daegu, Florian Demange, also played some role in the establishment of this church. That being said, Eonyang Cathedral actually fell under the Catholic Diocese of Busan at the time of its construction.

Even today, Eonyang is considered to be in the countryside. This would have been even more true one hundred years ago. It is then interesting that such a large building was built in such a rural setting. Was it meant to attract locals from all over the county? Did they predict future growth in the area? What needs did the Catholic church think needed to be met here? Though these are things I am curious about, the answer to all these questions may simply be that the Catholic church, with its large coffers, had enough money to build cathedrals anywhere. 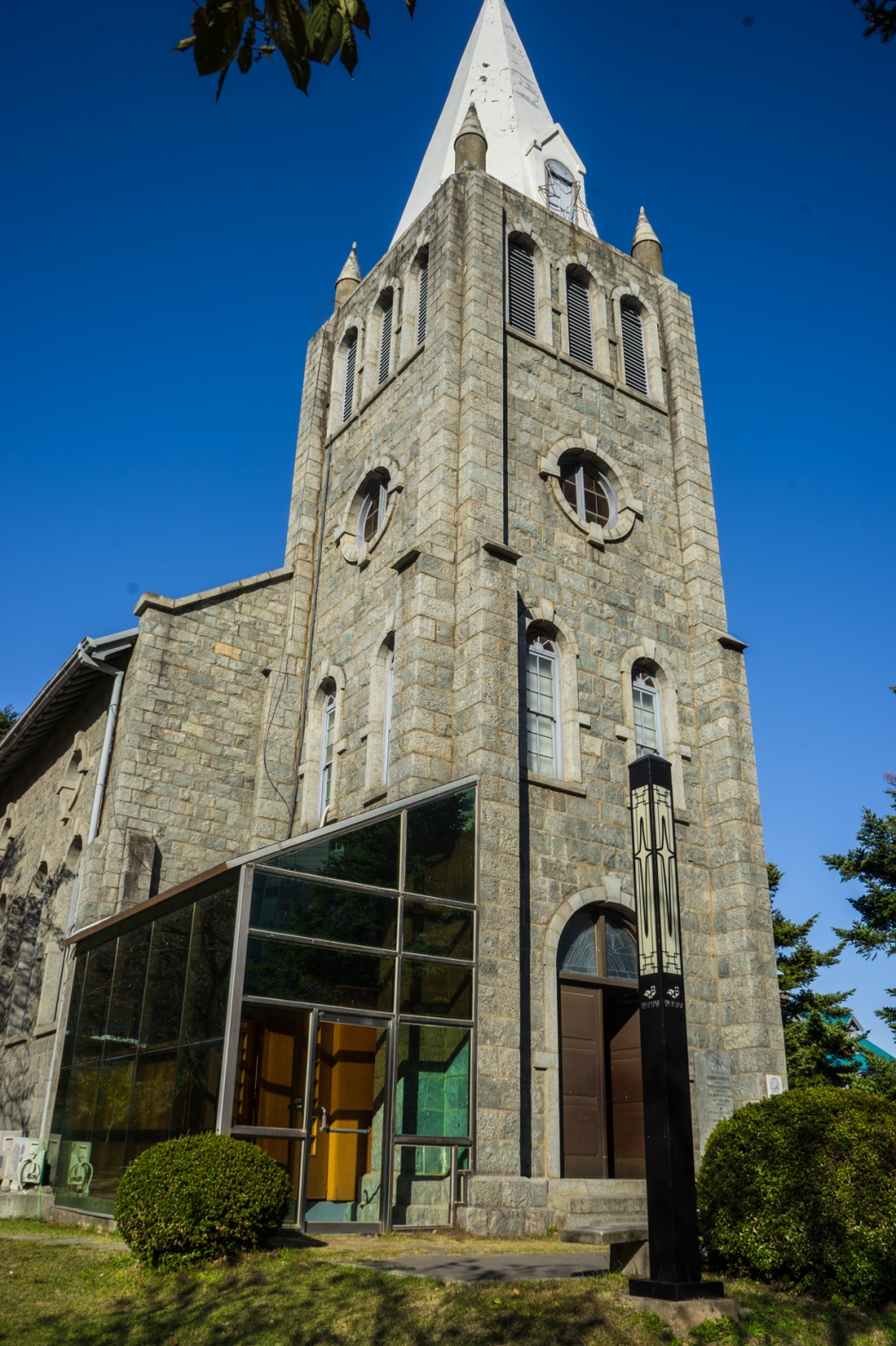 From the inside, we can see its beautiful vaulted ceiling accented with turquoise and gold paint. A series of arched and circular windows were placed uniformly throughout. An old stone holy water font can be seen just inside the entrance. In the entry way, I noticed an original iron door, probably a former fireplace vent or something. 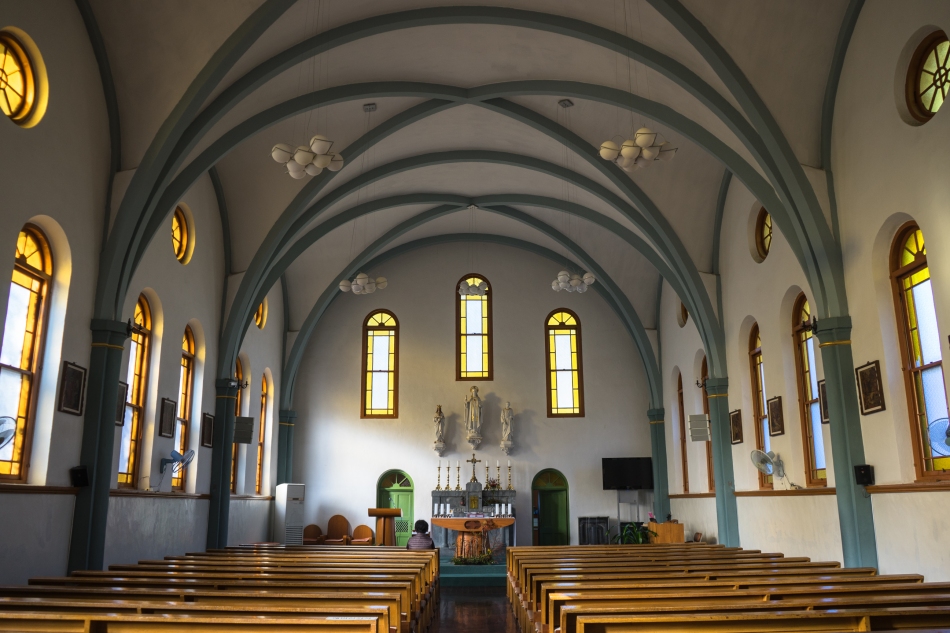 Next to the cathedral is the parsonage, built of the same materials at the same time as the cathedral. Interestingly, it was built on a hill, making the bottom half of the house kind of basement-like. The porch facing the entry road features clover and arch designs in its balcony. Its gabled roof contains six dormer windows and two red brick chimneys. The parsonage is currently being used as an exhibition hall and for storage. 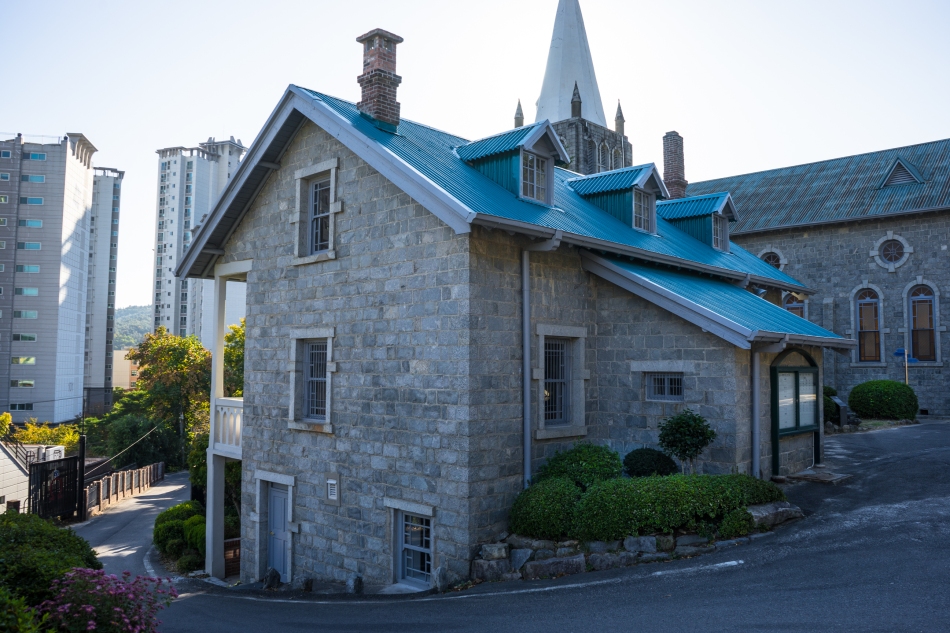 Lastly, a mid-century modern building sits behind Eonyang Cathedral. It appears as if the builders tried to mimic the basic shape of the cathedral’s architecture and its parsonage, though it is unclear what it is used for at the moment. 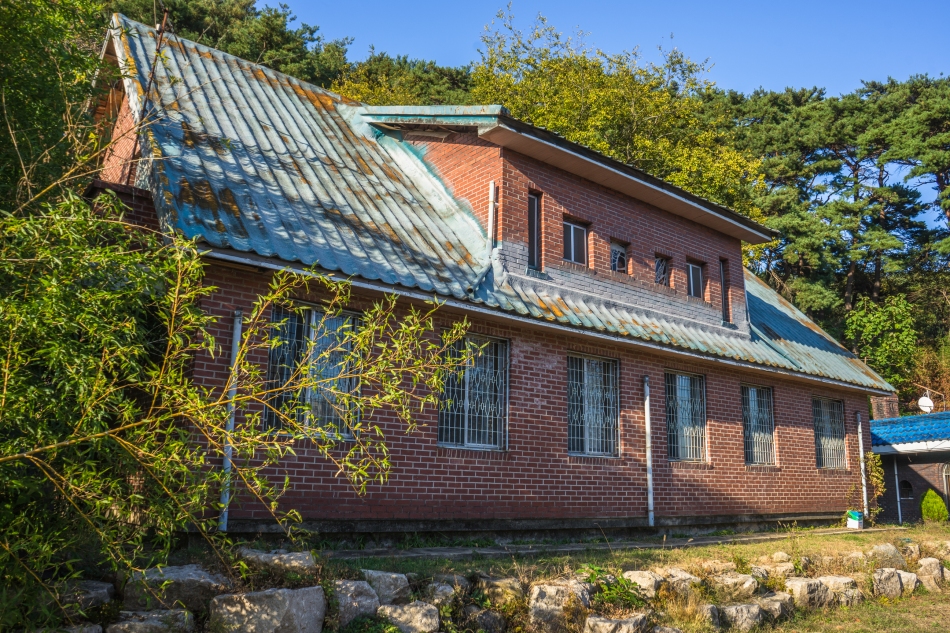 There are a handful of Catholic churches in nearby villages, most of which reside in old hanoks, but one of them can be seen in a small 1958 red brick structure. None of these seem to be particularly noteworthy, architecturally speaking. However, I have included them on the map at the end of this blog post.

The last noteworthy structure in Ulji county can be found in Sangbuk-myeon. It is an old administrative township office dating to 1932. In 1928, the townships of Sangnam-myeon and Habuk-myeon were integrated with Sangbuk-myeon, and this office oversaw municipal affairs for the area. At least eighteen administrative offices were established in Ulji county at that time, yet this is the only one of its kind that remains. It is mostly hanok in design, but it isn’t entirely traditional. A hanok’s roof typically swoops out from the corner posts, yet this structure’s back wall features a roof that slants further down, forming a section that almost looks more like an extension or add on. The office therefore has both hipped and gabled roof sections. The gabled porch entry is a result of Japanese influence at the time. 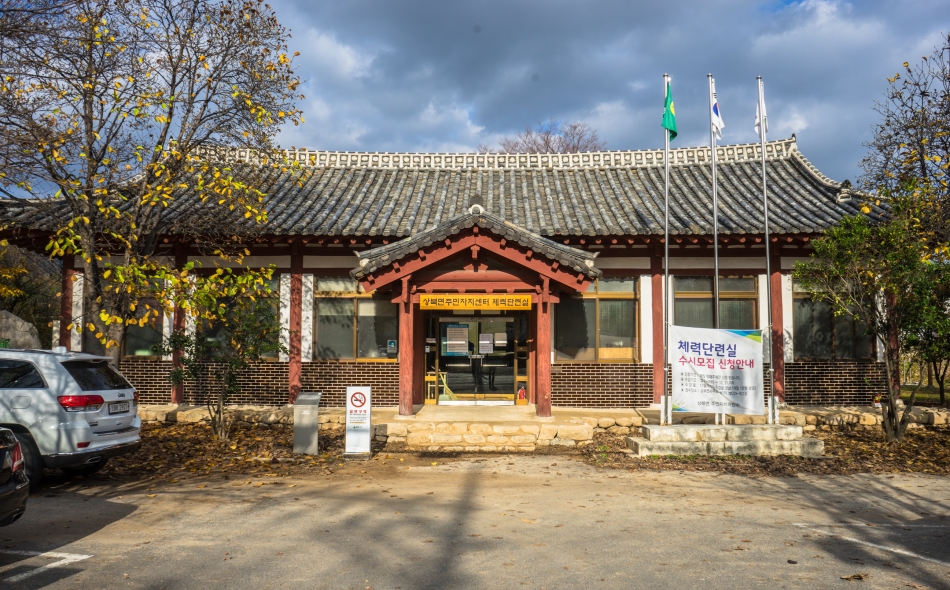 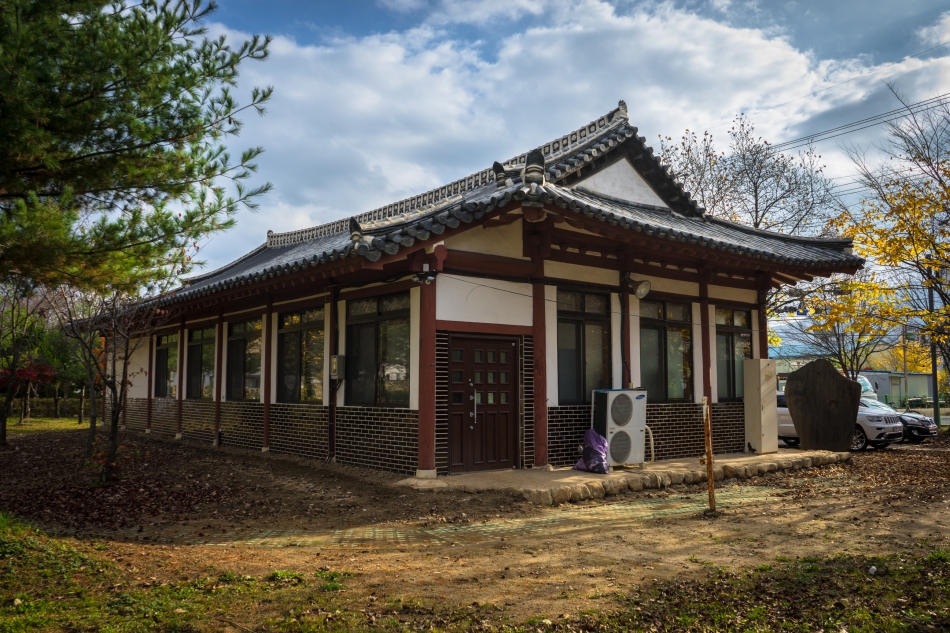 There are a couple of rail stations just south of Ulsan proper that were not included in this post but deserve mentioning. They are Deokha Station and Namchang Station. A few railway related buildings, which appear to be private residences now, can still be found down the street from Namchang Station. Deokha Station may also have some other railway structures near it, but I am unsure. Lastly, Jwacheon Station, which actually falls under Busan’s jurisdiction in Gijang county, is another one I want to photograph at some point. Jwacheon Station is a little more original than the other two, but none of these are particularly special train stations. Jwacheon Station would have been a good one to visit as it had an incredibly unique Japanese-built police station that was, unfortunately, destroyed sometime after 2008.